Rainwater Harvesting as a solution to Angola’s water problem
The harvesting of rainwater entails the collection and storage of rainwater in suitable containers, etc. water storage tanks or reservoirs. Rainwater is considered pure because it is free from pollutants, salts, minerals and man-made contaminants. However, millions of litres of rainwater (an estimated 70%) that is perfect for household, agricultural, industrial and commercial use, are lost every year due to the water simply being soaked up by the ground or evaporating into the air . This is a problematic situation that can largely be alleviated by the harvesting of rainwater via a Rainbow Reservoir tank.

Rainbow Reservoirs is a leading supplier of water reservoirs to Angola. The provision of qualitative rainwater collection and storing solutions in Angola is our priority. We design and install cost effective water storage tanks and reservoirs with a capacity of 2 000 000 litres and smaller for the African market. Our superior tanks and reservoirs are designed to withstand the harshest of climates in Africa and outrank those of our competitors for the following reasons: 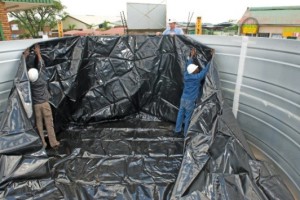 Superior Construction of Zincalume Water Tanks Angola
Our team of expert reservoir builders in Angola are committed to the construction and installation of the highest quality water storage tanks. We use only the best quality lightweight durable Aluzinc® alloy coated structural steel or colorbond sheeting in the construction process. Aluzinc® steel has proven its resistance to corrosion over and over. It can withstand the harshest of climates and are designed for a life span of more than forty years.

Heavy duty LLDPE (75mm solid film linear low-density polyethylene) are used to line the Rainbow Reservoirs. LLDPE liners are manufactured to meet the highest international food grade standards to maintain water quality and even in the harshest of climates it succeeds in retaining its inert strength, durability and elasticity. The steel walls of the reservoirs balance perfectly with its practical domed roof structure to ensure optimal balance. As the preferred manufacturer of reservoirs in Angola, we fully comply with international standards set for high quality liquid storage tanks.

Water Storage Tanks Angola – Accessories supplied by Rainbow Reservoirs
Various accessories are available with a Rainbow Reservoir and include: a lockable manhole, outlet with ball valve for the pump, a fire fighting outlet, an overflow and leaf basket and a full length ladder that can be detached.

Skilled Installers of Reservoirs in Angola

We have our own fully-trained skilled assembly teams who can install a reservoir in Angola with a capacity of 400 000 litres or less, within a day on a pre-prepared sand-base. For the installation of water tanks with a higher capacity – a concrete base is needed.

Please contact us for drawings and specifications should you require tank installation in Angola with a capacity of more than 400 000 litres.

For the quick and easy installation of your water storage solution – contact Rainbow Reservoirs today – the Leading Supplier of Reservoirs in Angola.

Should I install various tanks or a single water reservoir?

We are of the opinion that installing a single water reservoir is preferable to installing a number of tanks of the same capacity for the following reasons:

Click here to view more about the models, sizes and capacities of Aluzinc® Reservoirs – supplied and installed by Rainbow Reservoirs – your ultimate supplier of Reservoirs in Angola.